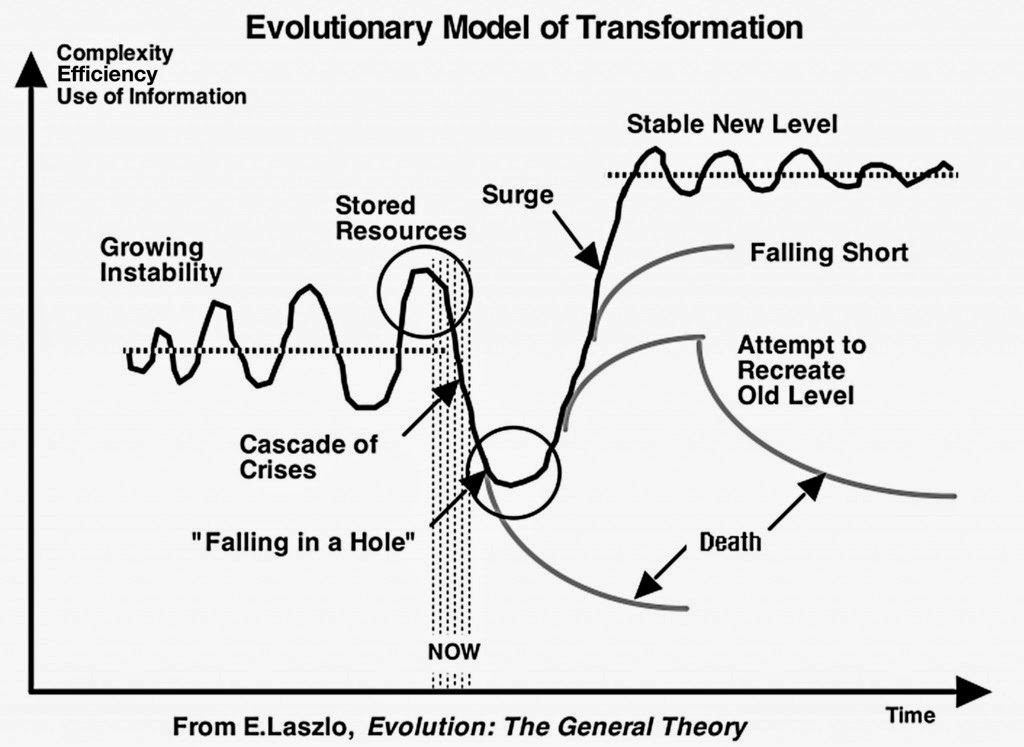 Systems theorist Ervin Laszlo says that living systems are self-correcting toward stability when they get out of equilibrium. Organic systems tend to over-correct in both positive and negative ways until the entire system meets a threat to its survival that it cannot resolve with the tools and information it has available. History and fossil records show us many examples of a sudden shift in the form or function of a species or a culture when a particularly big crisis ends a long period of stability. His graph “Evolutionary Model of Transformation” demonstrates that a person, group, or species will literally "hunt" in chaotic and unpredictable fluctuations as it seeks a more efficient, complex, and more successful way of life.*


In 1987, Laszlo asserted that the human species behaves as one united system and is entering (at the area labeled "NOW") an extremely destabilizing era in its history, the outcome of which is not certain. Humanity may simply die from its inability to resolve the issues around domination and violence, or make a new effort at stability that is incomplete. However, if enough information gets integrated rapidly, Homo sapiens could leap to a new level of functioning.

As a species, we are spread out around the emotional bottom of a crisis as we approach the end of a long era of addiction to violence and domination. We are struggling with the multiple crises of environmental, energy, and economic changes. Some of us on certain days feel that we are racing toward the edge of a cliff, exactly as addicts will do in the final stages of their addiction. At this point there is much alarm and protest as the abyss of chaos and the unknown fills the field of vision. Guilt is  loudly denied as we look for someone to blame, and there is a sharp increase in verbal and physical abuse. Keeping the system in control still seems possible, but it is an illusion. We deny disaster is imminent with rationalizations of the most outrageous sort. Does this sound familiar, like the daily news?
* Laszlo, E., Evolution: The Grand Synthesis, Shambhala, Boston, 1987
Email ThisBlogThis!Share to TwitterShare to FacebookShare to Pinterest
Home
Subscribe to: Posts (Atom)