Evolution of an addiction 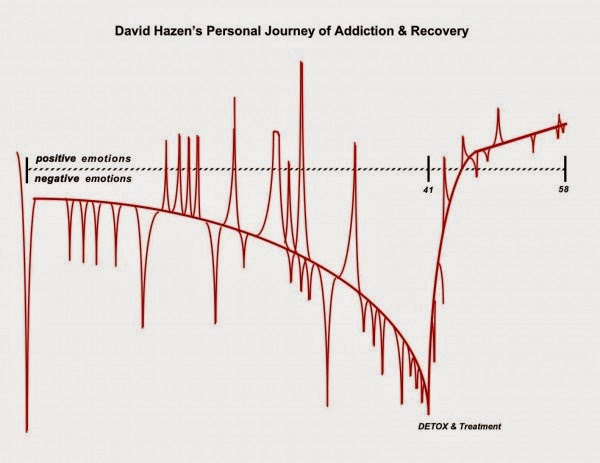 I drew this graph as an illustration of the progression of my disease of chemical dependency and violence. It shows how I lost and regained control of my emotional stability. At the time I drew this graph I was unaware of Laszlo’s drawing, and yet they are remarkably similar.   The macrocosmic process of cultural learning mirrors the microcosmic process of the individual.

My life began in the panic of abandonment. My family relationships gradually accumulated massive damage long before I indulged in alcohol and drugs. It was not until I was 18 years old that I began my 23-year use of mood-altering chemicals. The using was a vain attempt at relief from the pain I was experiencing. The chemicals completed the destruction of all my relationships. I became emotionally violent, passing hateful judgments on individuals and the entire culture in which I lived. I used arrogance and intimidation, backed up with the occasional burst of physical violence to get my way, to grab  some power from experiences of  powerlessness.  Towards the end of my active using, there were no positive emotional events, only a plunge into what is known as "hitting bottom," an extreme emotional low point, just before I accepted inpatient treatment. Notice that in the recovery phase, there is a rapid change to a new level of functioning in a very short period of time as I learned new lifestyle habits.

My recovery from fear and distrust has helped me see how out-of-control extremes of abusive human behavior, including my own rage at the micro level and national acts of war at the macro level, are part of normal, predictable learning patterns that can lead to stability and security, but only when there is new information, hope and mutual support available.